Learn about the sky grid survival map including how to play, what it is, gameplay tips and more. Join the latest Minecraft servers with SkyGrid.

This game mode in Minecraft takes the normal terrain and combines it with skyblock to create a huge grid of blocks. Start on a single block and collect resources from the vast grid to expand your base.

All the Minecraft blocks are scattered across the world ready to be looted for your survival. What will you create in this popular mode? Read the guide and learn how to play the servers and the map.

This is the easiest way to play the skygrid survival map in Minecraft. There are no downloads or installations required and you can hop online to start playing. Join a friendly community of other players and complete challenges to unlock new items and blocks. The server IP is skygrid.thesurvivalmc.com. 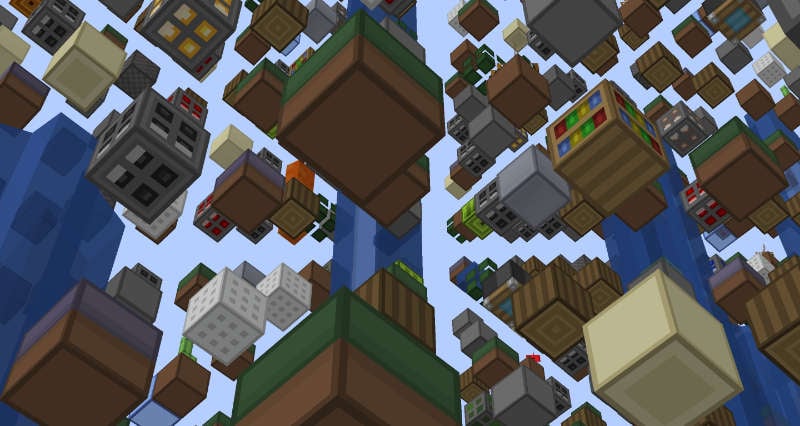 The start of the game can be more challenging than others. You must bridge across to new blocks without falling or losing the looted resources to the void. In order to build a base, you will need to carve out a decent sized area from the grid.

There's advancements and quests along the way to keep you entertained towards the end stages of the game. There are no limits to what you can create in this survival world; only the blocks which you obtain from the grid. 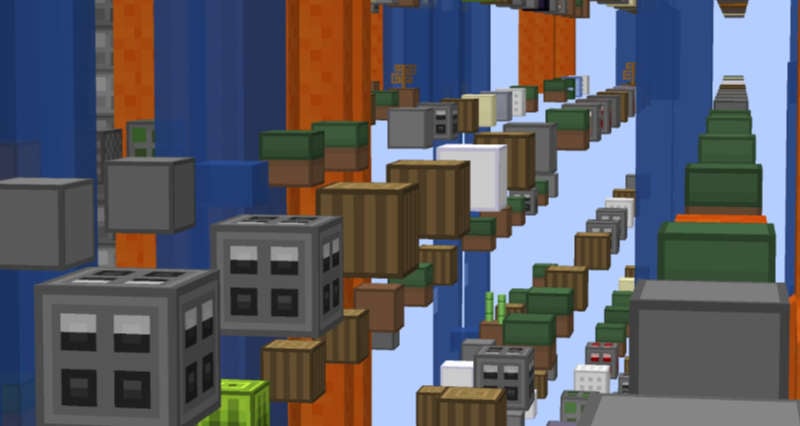 What Is Sky Grid?

It is similar to regular Minecraft survival in that your food depletes and you need to ensure you maintain your health. The main difference is that there are no biomes to explore and you obtain new items from the sky grid. The grid is virtually infinite and can be transformed into a big survival world.

You can team up with friends to create larger bases and tackle the advancements together. Don't fall into the void or you will lose your items! 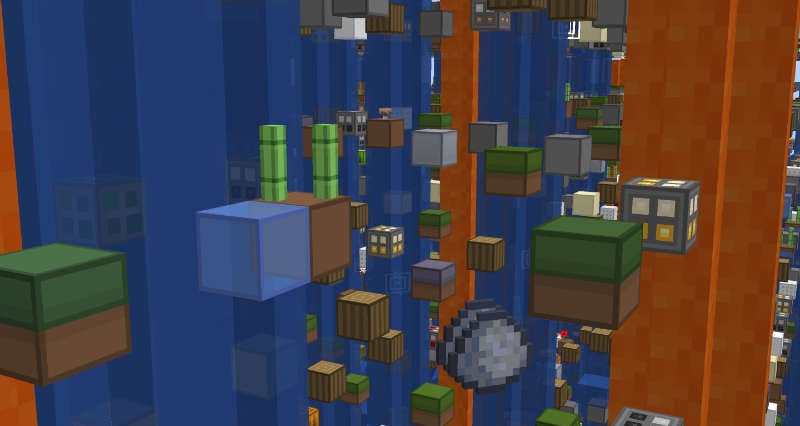 The SkyGrid MC server lets you play the popular map in a huge multiplayer world. Visit other players grids and team up on bases and challenges. It is running on the latest 1.18 version which means you can get all the new blocks. Team up and head into multiplayer areas such as the nether and the pvp arena. Welcome other players to the server and take part in a fun community.

One of the quicker ways to expand your survival map is with a generator such as a cobblestone generator. Utilising mechanics such as redstone, you can create much larger generators like those made popular by SethBling.

What Version Of Minecraft is SkyGrid?

The survival map for minecraft is available on the latest version of the game. While the singleplayer version is currently updated to 1.16.5, if you want to play on 1.18 you should join a multiplayer server. The grid is regularly updated with new features and addons to the game. There's also an in-game shop which features all the latest items and blocks if you can't find them! 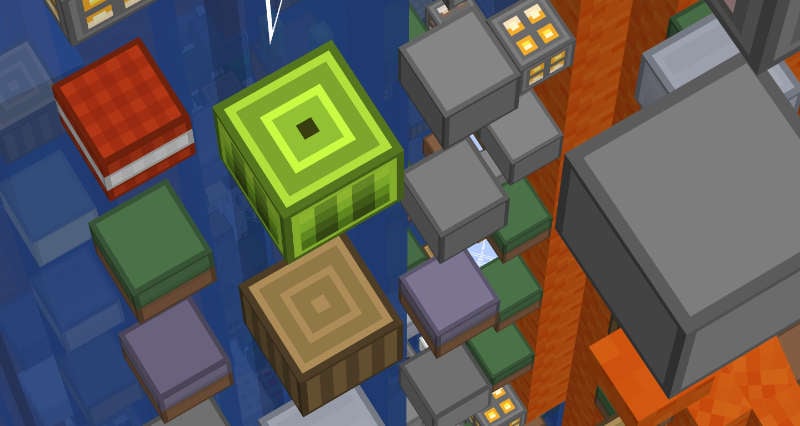 Is Sky Grid A Survival Map?

Yes! You are still in the survival gamemode just like in singleplayer. However, rather than a large world for exploring, it is just the sky grid! Ensure you keep your food bar replenished and avoid falling down so your health doesn't deplete. Stock up on resources to ensure your survival throughout this fun map. 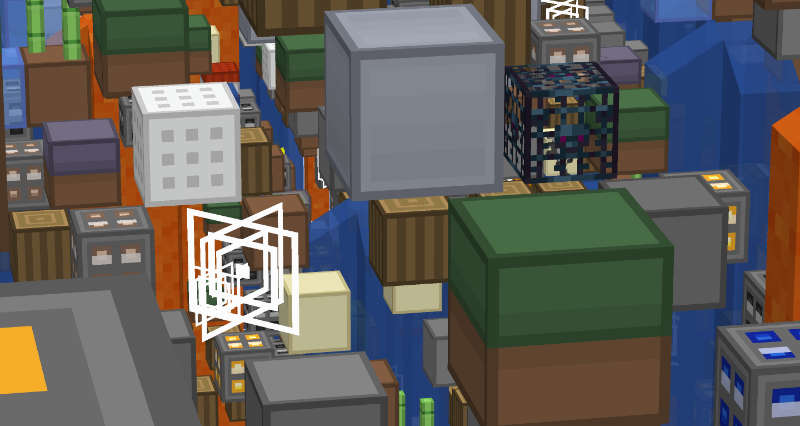 Seed for Sky Grid in Minecraft

There is no seed available for this map. In order to play, you must download the survival map or join a minecraft skygrid server. It is your choice depending on your preferences. If you just want the vanilla map with no enhancements, head to one of the download links and install it to start playing.

Meanwhile, multiplayer servers for Minecraft offer new mechanics such as an economy and a way to visit other players. There are no installations or downloads as well as plenty of new maps to explore. 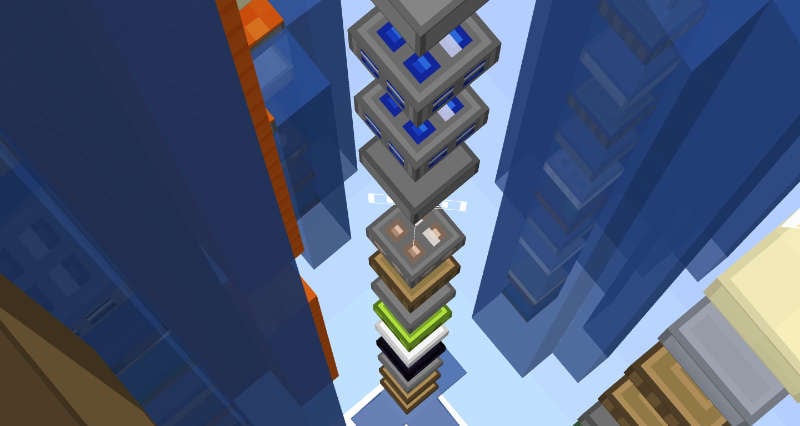 Where Can I Play SkyGrid?

In the newer versions of the game, there's dozens of new blocks. The nether update has added blocks such as depilate as well as new mobs such as the hoglin for you to come across. Explore the nether to see all the new biomes and bring them back to your spawn inside your base. Netherite armor and tools have also been added in recent versions.

The caves & cliffs update has made it possible to get amethyst which is a new metal similar to diamond. Multiplayer servers also add a range of new things for you to explore in SkyGrid. Head into the adventure world and battle harder monsters, PvP with other players in king of the hill, and parkour to earn extra loot for your base. Start your fresh adventure in SkyGrid now!

The original skygrid map was made by creator SethBling. Mojang has continued to add new blocks and items to the game which are now present in SkyGrid. It was premiered on YouTube where there are still popular creators making content on the game.

Where Is The Nether In SkyGrid?

Just like in SkyBlock, you can adventure into the nether by collecting the obsidian resources and forming a portal. Light it with flight and steel to form the nether portal and head inside to start further exploring the skygrid survival map.

What Are Minecraft SkyGrid Servers?

SkyGrid Minecraft servers add dozens of new features to the skygrid map. An mmo-style experience is formed with economies, shops, markets, arenas, monster bosses and more. Visit other players in the grid and team up on large scale builds. They are free to play and just as easy to use as the normal skygrid survival map. There is also parkour Minecraft servers which provide a sprinting adventure through the skies; also with no download or installation.